There was a hint of remorse on this final day of activities for the trip. We started off as a continuation of last night’s (absolutely) fantastic performance of Julius Caesar at the Bridge Theatre and were able to talk to David Sabel, the alumni who works at the theatre as the Director of Creative Development. 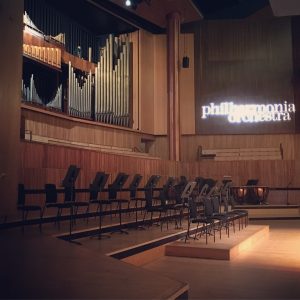 The experience of visiting the theatre as an audience first, and getting to know the origin and core creator of the show afterward was a great idea. David shared his life story in much detail (he talked for more than an hour!), diving from his first involvements as an actor right after coming out of college, to his immersion in other sectors that go beyond the creative industries, like graduating from an MBA program in Cambridge. His career was the epitome of creation, not just because of his non-linear (a word we heard of many times in the trip) career path, but also his understanding of the creative media industry as a whole, diverging externally of his love for theatre! We talked about how live recording videos of concerts could be the first moves to moving into event cinemas, how event cinemas may not necessarily take away the profits of a live performance but as an add-on, or how the future of technologies like VR, live recordings, 360 degree sound systems could be incorporated into live performances. On top of his vast knowledge, David’s idea of immersing the audience entirely in the Julius Caesar show was an example of how these creative ideas could be successfully used in more traditional forms of entertainment. 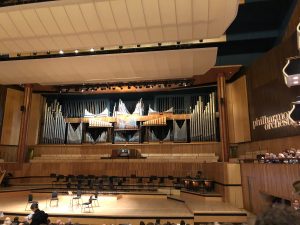 It was a short day, and our events ended after the talk with David, as well as a delicious (and luxurious!) late lunch at an Indian restaurant named Masala Zone near our hotel that officially ended our trip. However, my day got better from there – after getting some very essential shopping out of the way, I met up with my previous internship colleague, who had moved onto a job at the management level of the London Philharmonia Orchestra. I followed him into the orchestra’s very exclusive rehearsal, as well as a backstage tour (more like an informal meet and greet!). Never in the world would I remotely imagined to meet him in London, but also having this super rare opportunity to meet the orchestra!

The Philharmonia Orchestra is stationed at the Royal Festival Hall right by the river. The building was beyond just a concert hall – it was like a hub of an artistic community, with buzzing noises of crowded people formulating around exhibitions downstairs of the hall, couples sipping tea at coffee tables right by the floor-length glass windows; and the concert hall itself looked spacious, luxurious and full of history.  However, I was told that the hall existed before the newer additions to the building structure, so the acoustics of the hall was never improved since the 1980s. Personally seeing how the musicians struggled to project their music to the back of the hall, I realized that compared to Bridge Theatre, there was a stark contrast between a traditional form like music and relatively stagnant art form like theatre, and the innovative and integrating components of this greatly improving other aspects of the creative industry. It was beyond interesting and mind-opening to see both sides of technological development or enhancement in these different spaces, and yet they both thrived in a welcoming and arts-focused city such as London.

P.S: I also bumped into Casper Lee, one of the most famous British Youtubers, on the street of London today. That was a highlight and I wished I could write a whole new blog on how ridiculously joyous I was for the rest of the day. 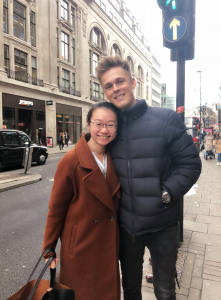