London Calling: Jack of All Trades, Master of All

This post was written by Alex Gold, a Senior Theatre Major at Northwestern University attending the School of Communication’s Global Media & Communications Seminar in London.

The past three days in London have been a whirlwind (to utilize a cliche but applicable term). We have traversed the city taking in its beautiful sights and culture, meeting incredible alumni and professors, and enjoying all that this global city has to offer. We studied London as a “creative capital” in class, and experiencing it in person I understand the term completely. London is vibrant and pulsing with the energy of artists and innovators of all different disciplines.

Our flight arrived at 8AM GMT on Saturday, and after traveling from Heathrow to the hotel and checking in, some of us needed a quick rest to shake off the jet lag while others headed out to explore. We had the weekend pretty much free of scheduled activities, so we split off into various groups to check out different parts of the city. Some of us took in landmarks like Westminster Abbey and Buckingham Palace, while others hit up thrift stores or the Tate Modern. Since I’m a theatre student, I wanted to spend the day taking advantage of all that London’s theatre scene has to offer. After a walk along the Thames River and lunch at Borough Market, I saw a matinee of the play “Cleansed” at the National Theatre. The National is easily the greatest non-profit theatre in London, if not the world, and it was a pleasure to explore this historic building as well as see the kind of challenging, fascinating play that London is famous for. After exploring the city a bit more, my roommate Lucinda and I got dinner and then I checked out another new play on the West End, “People, Places, and Things.” The show has onstage seating, so it was a real treat not only to be in the audience for this exciting play but also to get a great glimpse into the house of a historic theatre from an unorthodox perspective.

The next morning (after the most satisfying sleep of my life) I headed to Shoreditch, home to street fairs and London’s thriving graffiti scene. I took a tour of various works of street art all over the neighborhood, traveling off the beaten path and seeing incredible pieces that redefined my conceptions of what graffiti can be. The guide told us all about how various international graffiti artists converge on London, as well as how London-based artists are commissioned to travel all over the world decorating cities. It was a great exploration of London’s global nature and its status as a home base for creatives who are pushing boundaries in their respective fields. 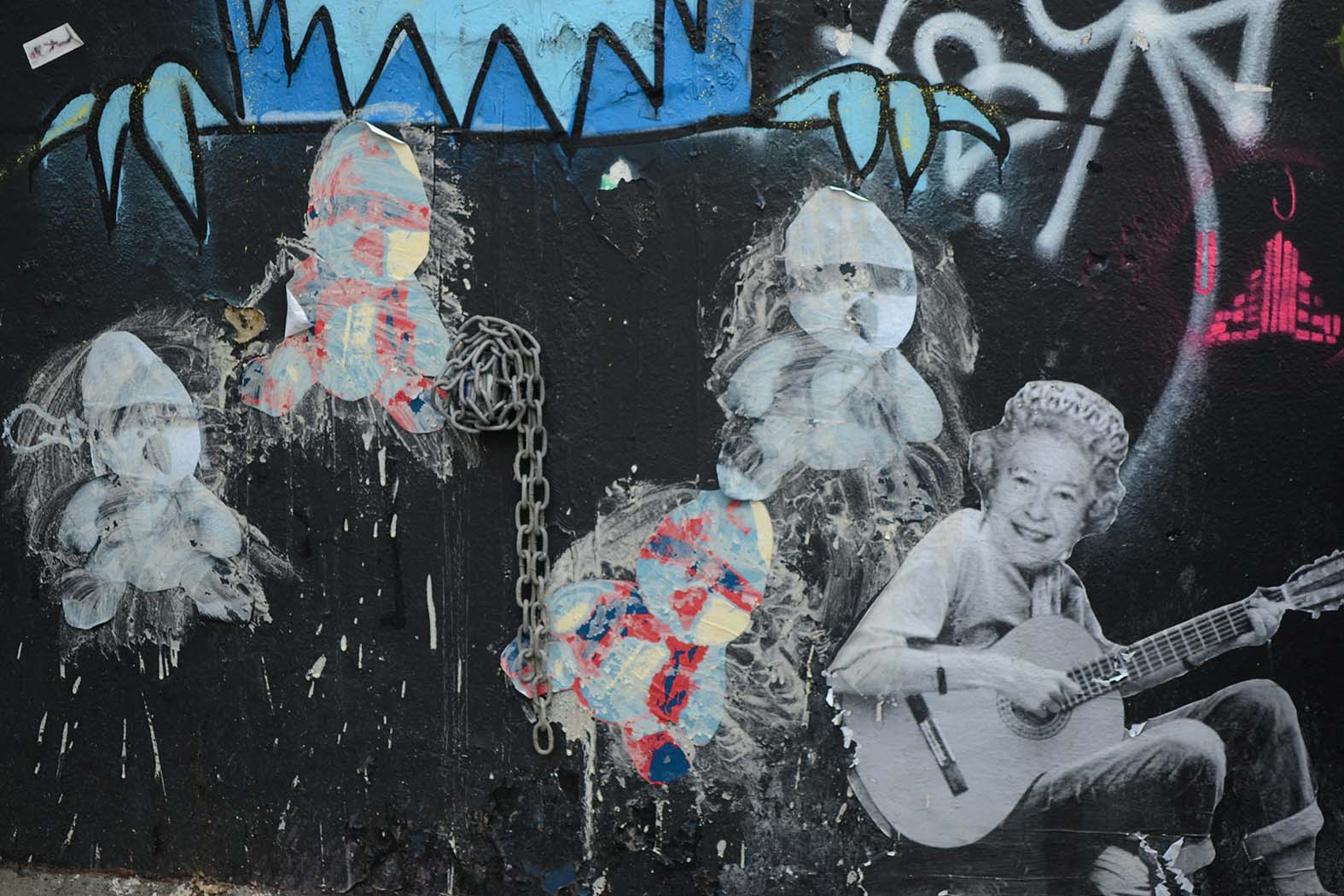 That night, we were hosted by Northwestern alumnus and London theatre stalwart Lou Stein, an incredibly friendly and colorful guy who regaled us with stories of his eclectic and thrilling career before we sat down to a luxurious three-course meal in the Groucho Club, a private club for London theatre artists that Lou helped found in the 1990s. It was inspiring to hear from an alum who has achieved so much success here in London, and whose career has taken many unexpected and exciting turns. For instance, Lou is about to begin as artistic director of Chickenshed Theatre, an accessible theatre company based in the UK. It’s new territory, but Lou’s tireless work ethic and strong values make him a perfect fit. The dinner and conversation were wonderful, and a perfect start to our week in the Global Media and Communications Seminar proper.

Monday morning started promptly at 9:00AM, where we began our lecture series at the London School of Economics. We heard from Professor Charlie Beckett, who led an engaging and fascinating lecture and discussion on the role of the news media in Great Britain, comparing and contrasting this relationship with the one that exists in the US. Tracing the topic from the coining of the term “The Fourth Estate” in London in the 1787 to the current age in which a single Tweet can derail a political campaign, Professor Beckett provided a captivating glimpse into the importance of communications to the political process.

Afterwards, we headed down to the Ogilvy & Mather offices, in a beautiful space right on the river. We were introduced to Abby, a Northwestern alumnus now based out of the London office, and then met with several employees and marketing professionals there. They spoke with us about the different stages and segments of marketing and how the project management, creative, and planning departments all communicate and collaborate to produce a winning ad. One of the creative staff there told us that advertising professionals, on a twist on an old phrase, must be “jacks of all trades…and masters of all.” This got me thinking about how the eclectic skillsets we develop at Northwestern will come to our benefit in the professional world. The Ogilvy and Mather folks utilized a long-form video they produced for Phillips as their example, which I highly recommend you watch if you need a good cry. We’ve been studying how advertisers use emotional human content to help bring brands to the forefront of people’s minds as well as how they quantify engagement, and talking to the professionals at Ogilvy and Mather really cemented those ideas.

After a delicious lunch at a pizza restaurant right on the river, we returned to the LSE campus to meet and speak with David Sabel, a Northwestern alumnus who cannot be put in a box. He has been an actor, a director, and even a world-class chef, but most recently worked at the National Theatre, where he pioneered the NT Live program. NT Live broadcasts London theatre productions worldwide into cinemas (including directly into Northwestern’s Wirtz Center), providing unprecedented access to world-class theatre and expanding and diversifying audiences. His work is truly inspiring, and he has recently moved into a new role as Director of Creative Development for the London Theatre Company, a new start-up that plans to open a 900-seat theatre right in the heart of the city in Summer 2017. David is committed to programming exciting and ambitious new works into this space, a prospect that has become increasingly rare in the world of for-profit theatre especially. It was so inspiring to hear from David not only because I admire his career and work, but also because he openly told us that his seemingly diverse and unrelated set of skills and experiences have all contributed to where he is today. He told us to “never be afraid to admit to what you don’t know,” reminding me that life and career are a continual learning process in which we never stop growing. As a senior on the verge of graduation, this meant a lot to hear.

We are about to head to a performance of The Curious Incident of the Dog in the Night-Time, a show that began at the National (sensing a pattern?) before heading to the West End and Broadway and is now touring the United States. I can’t wait to see this beautiful, ambitious, international piece of theatre in the city where it was born. It’s been an exhausting but thrilling couple of days and I can’t believe how much more time we have to explore all that this wonderful city has to offer.