This post was written by Andrew Harlan, a Junior  Communication Studies Major at Northwestern University attending the School of Communication’s Global Media & Communications Seminar in London.

A week in one of the most culturally vibrant cities in the world with a group of eighteen Northwestern students. Sounds pretty incredible, right? Well, it is sure starting off that way.

This spring break, I have the incredible privilege of taking part in the School of Communication’s Global Media and Communications seminar. After a quarter-long course back on the Evanston campus, we flew across the pond to London, where we’ve been exploring for the past couple days. After tons of sightseeing, Tube-riding, tea-sipping, and much more, today was our first full day of events. We kicked things off in the morning with a lecture at the London School of Economics by Professor Nick Couldry. Couldry’s lecture focused on the new global media environment and the ethical questions it raises. In a contemporary climate in which an individual’s online data are at the disposal of companies and corporations, Couldry’s lecture raised important questions about the path ahead.

After lecture, we made a pit stop at the London Film Museum’s exhibit on the James Bond franchise. From Bond cars to Bond songs, the museum was full of movie history. Many students made their way to Covent Garden after visiting the museum, sampling tea in various shops and finding souvenirs to purchase for family back home. With more free time after lunch, I spent some time at the National Portrait Gallery. Starting back at the Tudor portraits from the sixteenth century, I made my way through over five hundred years of British art in about an hour and a half. I’ve always been fascinated by the British government (specifically, the monarchy). It was fascinating to see how art, fashion, and British identity changed over the years. 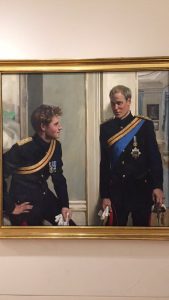 For me, the real treat of the day was our site visit to Nancy Bishop Casting, just north of Leicester Square. Nancy Bishop is an impressive Northwestern alumna, having graduated from the School of Communication with a master’s from the Theatre department. She has had a fascinating career trajectory, starting off in Chicago where she founded multiple independent theatre companies. From there, she landed in Prague, where she continued working in the theatre world. Various connections brought her to the Film/TV casting industry and to London today. As a young individual highly interested in careers in both casting and talent/literary representation, Bishop’s talk was particularly insightful. She spoke about topics ranging from her own Northwestern experience to how the industry is working toward diverse casting practices. I am so thankful to have had the chance to meet such a powerful player in the global film/television industry and to learn from her experiences. 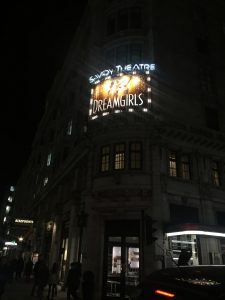 With some free time left in the evening, I finished the day by purchasing some day-of tickets with other students for the current revival of Dreamgirls playing at the Savoy Theatre. It’s no secret among the students on the program that I’m one of the big theatre geeks of the group, so to say I loved the show would be an understatement. The show’s intricate costumes and glittering set design wowed the audience, and the cast members delivered powerhouse performances. Truly, a remarkable way to end a day in one of the greatest cities in the world! Now, it’s time for me to catch some sleep before our next big day…