When I was little and Mom still made Eggo waffles before school, I was a superstitious little nut, and the toasty-ness of my waffles indicated how my day would end up. Perfectly golden waffles meant the day was going to be good, but mushy or burnt meant I’d be miserable. Before we left London, my parents asked if I was nervous. I said yes, mostly about unlikely things, like a terrorist attack or being kidnapped. They proposed I should be more worried about being pick-pocketed. The morning I left, I made myself cinnamon raisin toast because, of course, I needed some indication from the omniscient toaster-gods as to how this trip will go. Lo and behold, perfectly golden. A good sign.

When we went down to the lobby this morning, the TV was on. As the newscasters spoke with ambiguity and confusion about the bombings in the Brussels airport, we saw pictures taken by terrified people in the dust and chaos. I doubted my toast, and sat anxiously waiting for information about how we would move forward.

We were told that our day would move forward as planned. We started off with two lectures: one from LSE professor Wendy Williams, and another from SoC alum Thomas Hoegh. Wendy began with a discussion about the flows and exchanges between media in the global “rich” north and the global “poor” south. She explained that the media in the global north tend to focus mostly on a combination of news from other countries in the north and from countries which were formerly parts of the country’s empire. This is problematic because citizens, who believe their media provide news from all over the world, often do not hear about events in countries in Africa and Latin America unless the countries were once a part of an empire. As we discussed the ethics of media, I wondered how many acts of violence I’d missed because of the media’s biases.

Wendy’s critique was especially meaningful as a lead-in to Thomas’s presentation. While Wendy is an academic, Thomas is the owner of Arts Alliance, a business which aims to please and challenge its audience with event cinema worldwide. He explained that in any field, professionals need invite audiences into the development of a creative work early on. The contrast between Thomas’s and Wendy’s perspectives stimulated a discussion about our desire to be both reflective students and impactful “grown-ups.” As a Communication Studies student with an interest in marketing, it was fascinating to hear about Thomas’s global business and the challenges he faces as he finds the balance between maintaining a profitable business and challenging the world’s cinema-goers to consider cultures and narratives beyond their own.

For lunch, we went to Dishoom, a fantastic Indian/Iranian restaurant in the style of a Bombay cafe. We chatted about our plans for the evening and the events of the morning over plates made to share. My favorites were a hot and spicy chai tea and lamb curry. While our lunch was entertaining, productive, and generally relaxing, I felt strange soaking my bread with curry while the thought that death could happen to anyone at any moment ran through my mind.

After lunch, we headed over to the BBC Broadcasting House. Solemnly, we went through security and waited in a lobby for our guide. In the lobby was a television with BBC’s coverage of Brussels. A large crowd of people— tour groups from all over the world— stood around the TV silently. After a few minutes, our group started our tour. We saw BBC’s TV broadcasting sets, watched a radio show host practice in the radio theatre, and even got to enact our own radio drama, starring our professor Neil Verma. Classmates chanted his name and we all laughed while he used his best radio voice to play the spooky villain. 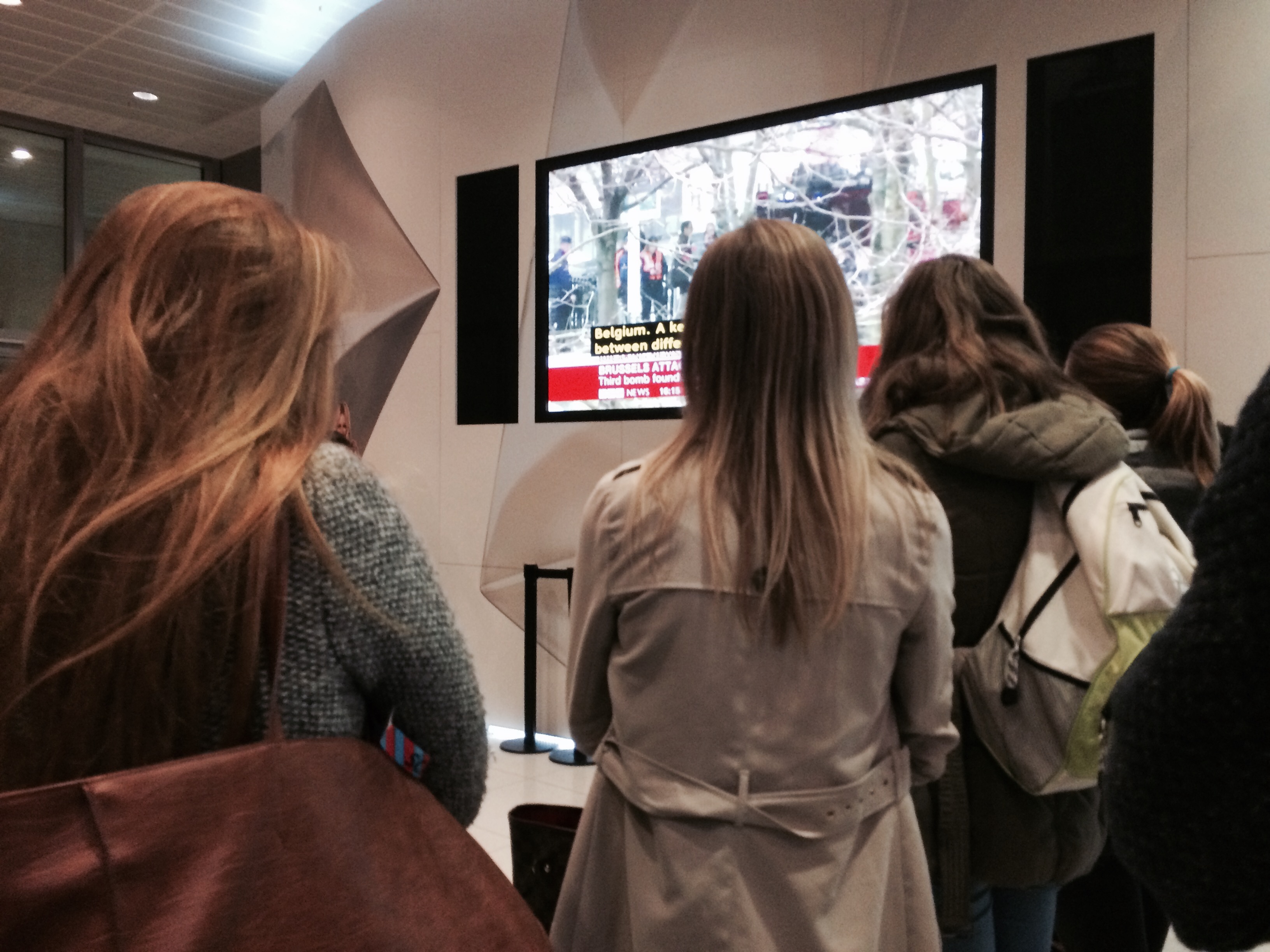 After the BBC tour, we were free to explore the city on our own. Friends and I walked to Leicester Square to watch the stars of Batman v Superman at the film’s premier. On our way, among the thousands of people walking on the streets of London, one man played The Beatles’ “Let it Be” on the sidewalk with his guitar. All day, I had felt like we were ignoring the tragedy. We only acknowledged our feelings in the context of critiques against the media or our safety as international travelers. I felt guilty because I know tragedies happen every day and are so often unnoticed by the global north because of biases in the media, and because I had warm food in my belly, and because I have opportunities that some will never have, but I needed a moment to set acknowledge this burnt toast. I don’t know who this man was, but in this moment, I realized that individuals felt their grief in their own ways. I was anxious and horrified at these violent acts, but so was everyone else. Maybe letting it be isn’t the solution— stagnation and inaction are  dangerous— but despite tragedy and loss, life goes on and beauty still exists.

After exploring the city, we settled into a pub that was rebuilt in 1667 for our first fish and chips. I sat on Charles Dickens’ preferred bench. I tried to chat with a parrot that sat by the host. I listened to different accents joining in conversations about friendship, adventure, and London. I shared my chips with the friends I’ve made over the last few days. And they were golden brown.